On Wednesday 31st October, all the staff and children dressed up as spiders, pumpkins, witches and many other ‘scary’ characters, and we all had lots of fun.

That morning as the children arrived, their parents were asked to place their hands in the ‘mystery’ box to see if they could find spiders and win treats for their children. Most were relieved that no real spiders were used! Thank you to the mums and dads who took part. 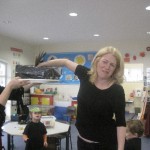 Once all the ghosts and ghouls, erm…… I mean children were settled in we had a frightful snack consisting of gooey green jelly, horrid yoghurt and terrible treats.

If that wasn’t enough, the scary monster children could earn extra treats during our ‘Trick or Treat’ walk. We spooked everyone at the builder’s yard, estate office, kitchen and even scared the workers from Worcester Council into dipping their hands into the Mystery Box!

After a hard morning's scaring duty we returned to the ‘Nightmare Nursery’ to play musical bumps, statues and dancing games, and had to find even more spiders hidden around the classroom.

Now, any normal ghosts and ghouls would have called it a day, but we didn’t stop there!  All the children were brave enough to dunk their face into a ‘dreadful dip’ of icing sugar to retrieve even more treats. It was then time to play outside and we decided to have some ‘monster madness’ racing the new scooters that we recently purchased for the nursery (with money raised by naming the teddy)

It was finally time for all the witches, ghosts and monsters to get some rest before next halloween. We read a scary book before having a well earned snooze, reflecting on all the fantastic fun we had that day. A big thank you to Mrs Lockley and Mrs Judge for bringing in cakes, and thank you to all the staff and children for making this an unforgettable day.

Previous Article Next Article All Articles